As we welcome our new and returning students to campus this week, we also welcome three new faculty members to the Govs community. James Cramphin joins us as Associate Director of Admission, Ramon Tejada '05 joins us as a Spanish teacher, and Sonia Yang joins us as a math teacher. 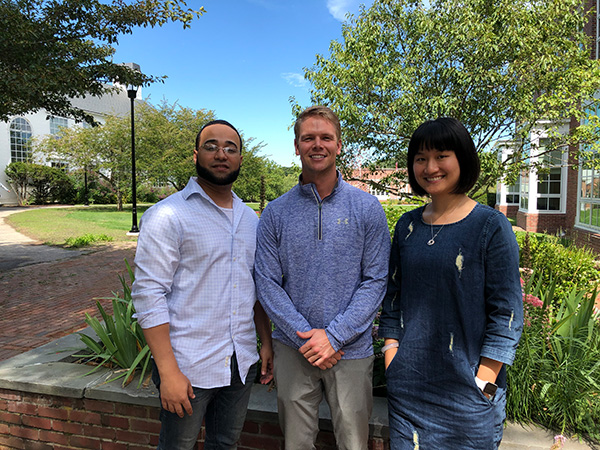 James grew up in New England's independent school community as the son of two faculty members at Renbrook School (West Hartford, CT) and a graduate of Suffield Academy (Suffield, CT). He earned his bachelor's degree in sociology from Brown University. While at Brown, James was a four-year starter, All-Ivy performer, and Ivy League Champion with the baseball team, finishing his career in Brown's all-time top-10 lists for wins, strikeouts, innings pitched, 10-strikeout games, and strikeouts per nine innings. After graduation, he played two years of minor league, professional baseball, starting and closing for an independent team outside of Chicago, IL.

After hanging up his cleats, James rose to a management position in retail operations with Apple and then spent two years working at Groupon's Chicago headquarters. James returned home to Connecticut in 2012, where he worked in the Technology Department at Rumsey Hall School and served as a dorm parent and as coach of the football, basketball, and baseball teams. In 2014, James moved to the Canterbury School campus (New Milford, CT) where he traveled and interviewed as an Associate Director of Admission. At Canterbury, James' duties also included directing the Post Graduate Program, serving as dorm head of a sophomore boys dorm, and assisting in coaching the boys varsity baseball team as pitching coach. James lives in Somerville, MA with his wife and their two dogs. James will serve as Associate Director of Admission and head coach of varsity baseball.

Ramon has nine years of experience in the education field—six of which were spent teaching Spanish to students ranging from fifth grade to high school, as well as three years of administrative experience. After graduating from Govs, Ramon obtained his BA with a double major in International Economics and Spanish from Lafayette College. Despite never thinking of going into education, Ramon fell in love with the classroom after being introduced to teaching middle school at the Fessenden School. He later went to work for the community of Lawrence as an administrator where he served as the Director of Family Engagement and Head of Enrollment for three years. Most recently, Ramon has been teaching high school Spanish at Berwick Academy in Maine as well as coaching basketball and baseball. Ramon is excited about once again embracing life on campus as he returns to teach Spanish and coach basketball and baseball. He joins our community with his fiancée and daughter.

Growing up in Beijing, China, Sonia transferred to Vermont Academy in her sophomore year and graduated with achieving the highest honors in math and science. After that, she obtained her bachelor's degree in math education at Boston University, where she student-taught at schools both in London, UK, and Brookline, MA. After graduating from BU with her Massachusetts math and Chinese teaching licenses, Sonia served as a math teacher, dorm parent, and JV tennis and JV softball coach at Perkiomen School in Pennsylvania. Earning her master's degree in special education, she firmly believes in individualized instruction with exceptional differentiation to meet the needs of all types of learners. During her spare time, Sonia enjoys ice skating, playing tennis and guitar and jogging with her husband. Also, as a well-seasoned world traveler who is fascinated by cultural diversity, she is enthusiastic about bringing empathy and social justice into her classroom for her students.

Please join us in welcoming our newest faculty members to Govs!