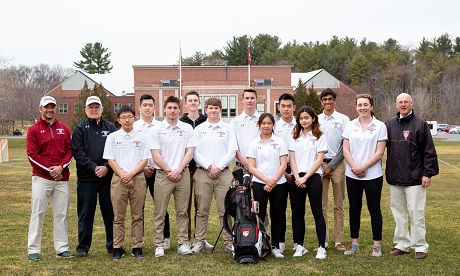 The Governor's Academy has had a golf team since the 1920s and the Ould Newbury Golf Club is the team’s home course for practice and matches. Ould Newbury is a semi-private club, but the Academy’s students and faculty have special privileges because the school owns the land that includes the course and the clubhouse. This nine hole gem is a challenging course, a great place to hone skills.

The Governor’s Academy golf team competes in the Independent School League against Belmont Hill, Brooks, BB&N, Lawrence, Middlesex, Milton, Nobles, Rivers, St. Georges, St. Mark’s, St. Sebastian’s, and Thayer. Besides playing each of these schools at least once during the regular season and competing for The Walworth Trophy (the team with the best win-loss record in the league), the Governors also vie for the Kingman Cup, a one day 18 hole medal play match between the top five players from the ISL schools. In addition, the golf team competes with Andover and Exeter at their home courses on three separate dates, in 45 holes of medal play competition for The Witherspoon Cup.

Both boys and girls are welcome to try out for spots on either the varsity or junior varsity team. Typically, there are 16 students who comprise the two squads and seven or eight players will earn spots for competition at the varsity level. The varsity team plays two or three matches a week during the spring season.

Recent graduates have played or are currently playing at Boston College, Colby, Williams, and Trinity. We look forward to an enjoyable and successful 2020 season.

For more information about golf at the Academy, please contact Coach Steve Ogden.

Coach Ogden grew up playing on the golf course that Governor's Academy owns, Ould Newbury Golf Club, and has coached the Govs Varsity golf team for the past 5 years.  He also coached golf at the Varsity level in Florida for 7 years.  For 30+ years he has led co-ed teams, all-boys and all-girls teams ranging from youth sports to Middle School to the Varsity level of prep school: lacrosse, hockey (where he now works with the Instructional Hockey squad), soccer, cross-country, volleyball, baseball, and basketball.  He currently plays to a 7 handicap and tries, as much as possible, to play in state-wide and local tournaments.  Next challenge as he closes in on age 55: qualify for the Massachusetts Senior Open.

Coach Ceglarski has been involved in the golf program since 1998 when he joined the team as an assistant under legendary Coach Mike Moonves.  They coached together until 2009 when Moonves retired.  Coach Ceglarski then directed the program until 2014 when current varsity Coach Steve Ogden took over the varsity program the following year.  He works now as the JV coach and brings his 21 years of experience to help guide the JV team as they try to improve their skills to play at the varsity level.

Tim Johnson, Class of 2003 from the Academy, was a member of the golf team from 2000-2003.  During his high school career, he earned MVP honors his Sophomore and Junior year, All-Conference his Junior and Senior year, as well as captain his Junior and Senior year.  After graduating, Tim spent a year in South Carolina at the International Junior Golf Academy before continuing on to George Washington University.  During his college career, he earned All-Conference honors as a freshman, MVP as a Junior, captain as Junior and Senior, Academic All-American honors as a senior and finished with a 76.2 scoring average.  Additionally, Tim participated in two USGA Championship tournaments, the US Junior Amateur in 2002 and the US Public Links in 2004.  Currently, Tim, along with his older brother, operate a boutique real estate investment company based in Cambridge, MA.  In addition to the daily work grind, Tim continues to enjoy golf, running, skiing, the outdoors, as well as mentoring for BBBS.