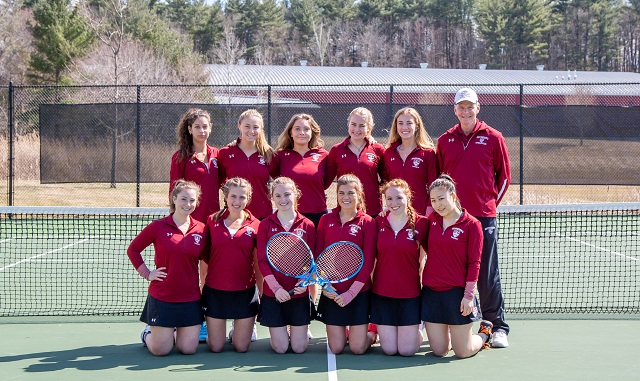 Girls Varsity Tennis competes with grit and good sportsmanship in the highly competitive Independent School League (ISL), a 13-team league that annually produces teams vying for New England Prep School Athletic Conference (NEPSAC) championships in Classes A, B, and C. Governor's competes in Class B for mid-sized schools. We play a 16-match schedule; 12 matches against ISL teams; 4 against out-of-league teams. The ISL match format is 6 singles matches, each comprised of 2 sets, and 3 doubles matches of one 8-game pro set each. Players are eligible to compete in both singles and doubles. All of the teams with which we compete include experienced players; those at the top of their team's ladders have USTA experience and rankings. Our facilities include eight outdoor hard courts, all of them resurfaced in the last two years, and three indoor courts. We practice and compete 6 days a week throughout the spring athletics season, usually playing matches on Wednesdays and Saturdays.

Practices are typically 75 minutes on court plus 15-30 minutes of off-court conditioning: stretching, plyometric exercises, running, and (occasionally) yoga. As individual players and as a team, season after season, we aim to compete to the best of our abilities, to win with grace and to rally from setbacks, and to have fun playing the game that will be, for most of us, a lifetime sport. Twice in the last decade other ISL players and coaches have awarded us the league's Marion Z. Jessup Trophy for exemplary sportsmanship.

For more information, please send an email to Coach Bill Quigley or call him directly at 978.499.3335.

This is Coach Quigley's 10th year coaching the team.  He also teaches history, directs the Academy's Writing Center, and is assistant coach of the varsity volleyball team.