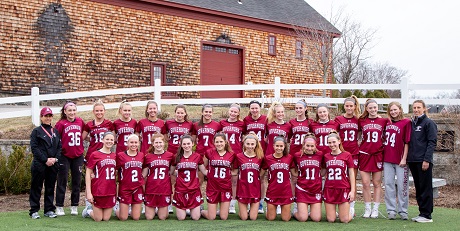 The Governor's Academy has a strong tradition of excellence in girls lacrosse. Not only do we field strong teams, but players also compete on select teams at National Tournament, All-American showcases and even on the U-19 World Cup team. After high school, many Academy players have gone on to play for some of the country’s top Division I and Division III programs at schools such as Duke, Syracuse, Boston College, University of North Carolina,  the Naval Academy, University of Maryland, Virginia, UNH, Richmond, Davidson, Bowdoin, Middlebury, Hamilton, Trinity, William Smith, Union and Colby among others.

The Govs are led by Head Coach Roberta McLain. Coach McLain captained her college team, was inducted into the New England Lacrosse Hall of Fame in 2005 and the Massachusetts Lacrosse Hall of Fame in 2015, and remains active at the national level as a representative to the national governing body, US Lacrosse. Assistant Amy Block '06, played lacrosse as a student at Governor's and went on to play soccer, lacrosse and indoor track at Union College where she captained the soccer team in her senior year.

The Govs regular season, a 16-game schedule, usually includes games every Wednesday and Saturday. The season typically begins the first week in April and ends the third week in May. Every other year, the Governors travel to Costa Rica over March break for a preseason training and community service trip.  Please find a link to the documentary of our most recent trip at the bottom of this page.

The team plays and practices on the Class of ’67 Turf Field. This 100x120 yard all-weather facility provides an outstanding venue for both games and practices. Many Academy athletes utilize the Alfond Fitness Center for cardio and free-weight training. Our state of the art sports medicine facility provides care for those who need attention to injuries and is staffed by two full time athletic trainers.

The coaches' goals for the program are to give the girls a positive team experience while also teaching them the skills they need to take their game to the next level. They believe the lessons learned on the field about being part of a team, goal setting and physical fitness will serve their players well beyond the Academy.  Additionally, Coach McLain’s goal is to help any player who wants to play at the next level attain that goal. She has great connections with college coaches and works hard to assist with this process.

A number of players on recent teams have received individual league honors for their play during their careers at the Governor’s including numerous All-American, Academic All-American and all ISL league selections.

This coming season, the Govs players will be watching many of their recent graduate teammates seeing great success at the Division 1 and top Division 3 levels in college:

Assistant Amy Block '06, played lacrosse as a student at Governor's and went on to play soccer, lacrosse and indoor track at Union College where she captained the soccer team in her senior year.