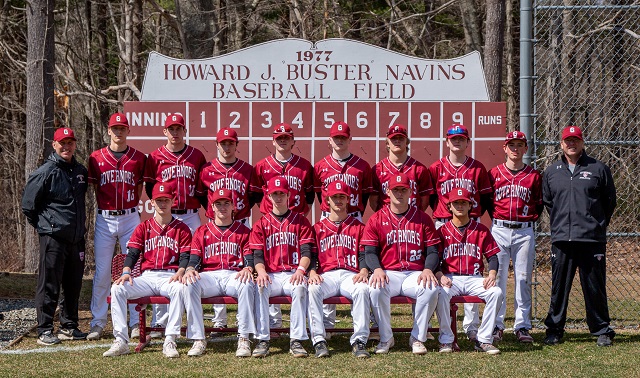 The Governor's Academy has a rich baseball tradition beginning with standouts such as Bots Young ’45 (tryout with the Yankees) and Fritz Freeman ’48 and leading up to recent graduates playing college baseball at divisions I - III. Established by the dynamic coaching duo of Ted Eames and Buster Navins in the 1930s – 50s and continuing in our program today, our ballplayers learn the fundamentals of the game and are well prepared for the next level should they decide to play in college. Current Academy alums can be found on the fields of Colby College, Williams College, Lafayette University and many others.

Our annual trip to sunny Florida during spring break greatly enhances team spirit, improves ability and gives us a jump on some of the other ISL teams braving the New England winter. The Governors play in the competitive, 16- team Independent School League and were league champs in 1989. Since the late 1980s, the boys of the GA diamond have consistently fielded competitive teams and are looking to resume their role among the league’s elite with a strong pitching rotation. Come spring, the Govs will be ready to take the field and demonstrate the sportsmanship, athleticism and intensity exemplified at The Governor’s Academy.

Coach Cramphin graduated from Brown University in 2007 where he was a four-year varsity baseball player. He was part of an Ivy League Championship, earned All-Ivy Honors as a pitcher, and finished his career in the top ten in wins, strikeouts, innings pitched, 10-K games, and strikeouts per inning pitched in Brown University history. After college, Coach Cramphin played two seasons of minor-league professional baseball with the Rockford RiverHawks of the independent Frontier League. He coached baseball at Rumsey Hall before joining the faculty at Canterbury School as Pitching Coach and Varsity Assistant Coach. He has worn many hats in his boarding school life, and he will join The Governor’s Academy as an Associate Director of Admission.