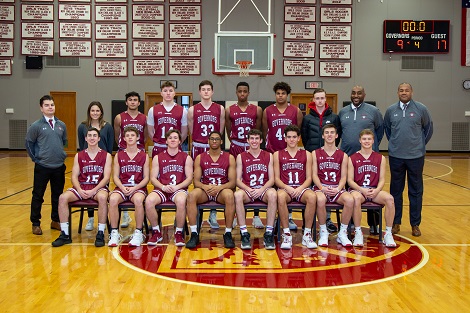 As we begin to prepare for our season, we welcome five new faces to add to the seven returning players who earned a varsity letter last season. We will approach the 2019-2020 season with a stonecutter mentality, hammering away daily to improve as individuals and as a collective. Along with our stonecutter approach on the basketball court, we also strive to impact Govs in the community and in the classroom. By taking this holistic approach to our young men's development, we hope to set them up for successful futures in basketball and beyond.

Some of the results of our program's basketball success can be seen with the numerous players that have gone on to compete at the collegiate level, including six former players who have gone on to play professionally in the NBA, Europe, and elsewhere around the world. Most recently, Duncan Robinson '12 is in his second season overall with the Miami Heat and has started his 2019-2020 campaign off strong for the Heat averaging 10 ppg while playing 20 minutes a game.

The distinguished list of players doesn't stop there, Govs was the home of two former McDonald's All-American players, Steve Bucknall '85, and 11-year NBA veteran Dan Gadzuric '98 in addition to Andre LaFleur '83 who set the NCAA assist record as a four-year starter at Northeastern University, was inducted into the Hall of Fame at both The Governor's Academy and Northeastern University.

The Governor's Academy boys basketball program competes within the 16-school Independent School League (ISL), which is widely known as one of the most competitive leagues in New England every year and consistently produces top-level collegiate talent for all divisions. Over the last few decades, The Governor's Academy boys basketball team has won eight ISL league championships and seven New England Championships.

Coach Shelton is returning to New England after spending two years in his home state of Indiana where he was the Head Boys Basketball Coach at the Park Tudor School in Indianapolis.  Previous to Park Tudor, Coach Shelton was at NEPSAC Class A Williston Northampton in Western Massachusetts. At Williston, Coach Shelton coached the Wildcats to winning back-to-back NEPSAC Class A  titles in 2015 and 2016 while earning NEPSAC Coach of the year in 2015.

Coach Shelton also served as Assistant Men’s Basketball Coach at Wesleyan University and was Head Coach of Wesleyan’s Junior Varsity squad for three years. During his tenure, Wesleyan earned its first NESCAC tournament appearance in five years. Coach Shelton also served one year as the Video Coordinator at Winthrop University and one year as Assistant Men’s Basketball Coach at the University of New Haven prior to becoming the head coach at Williston Northampton.