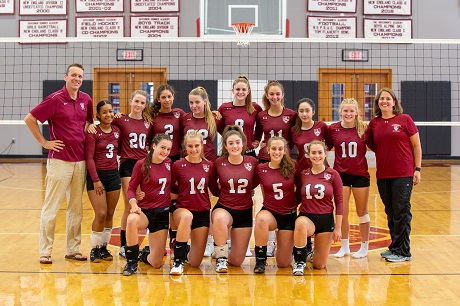 Govs volleyball competes in the Independent School League (ISL) and the larger New England Prep School Girls Volleyball Association (NEPSGVA). The team has been one of the top performers in New England Class B over the past few years, regularly qualifying for the New England playoffs. The team aims to return to the tournament playoffs each season. Govs graduates have continued on to the next level, playing in college at numerous different levels.

No matter if you’ve been playing club for years or simply want to learn the game now, the team welcomes athletes excited to play the game that want to do so with like-minded individuals. The coaches have developed a program to help veteran and new volleyball players improve their individual skills as members of a cohesive unit. Fundamentals, all-around hustle, mental focus, disciplined play, and having fun are all paramount to the program. In recent years the team has successfully managed an “athlete conversion project,” taking athletes from other sports, most often basketball, and adapting their athletic skills to the volleyball court while also getting them in good shape for their other upcoming seasons. The project has been a huge success due largely to the athleticism and competitive nature that these athletes brought to the volleyball court.

The coaches strive to foster a love of volleyball that will grow throughout a player’s time here at Govs and, when interested, continue on at the next level. Whatever their ability when they join the program, if an individual wants to play at the collegiate level, the coaches are committed to supporting the player make that goal become a reality. Govs graduates have gone on to play in college at the club, NAIA, and NCAA level.

The regular season begins the week after Labor Day with a week of preseason practices/tryouts for all varsity athletes. Matches are typically held on Wednesdays, Fridays, and Saturdays from the second week of September through the second week of November. Tournament playoffs take place the third week of November. All home matches are played in the Alumni Gymnasium. The team invites everyone to come out and watch; they love the support.

The team is coached by Jamie Brandt and Bill Quigley.

Prospective players are encouraged to fill out the Prospective Student Player form.

If you have any questions or would like more information, please email Head Coach Jamie Brandt.

Coach Brandt joined the Govs community in the fall of 2011 and has been the varsity volleyball coach since his arrival. Coach Brandt brings significant coaching and playing experience to the girls’ team. In college he was a four-year member, and three year starter, of the University of New Hampshire men’s club volleyball team. During his time on the UNH team they won the New England Championships twice and, in his junior year, the team qualified for and went to club nationals where they won the national championship. Prior to coming to Govs Coach Brandt taught and coached volleyball at the Branson School in northern California. His last two years at Branson the team won the California State Championships in back to back seasons.

Since arriving at Govs the team has regularly qualified for postseason as one of the top eight Class B teams in New England. In 2011 and 2014 the team finished the regular season with the top record in our class and won the NEPSAC class B championship title in 2012. Along with performing at a high level, Coach Brandt is a strong believer in positive coaching, always pushing the team to strive for the dual goals of both doing well and having fun.