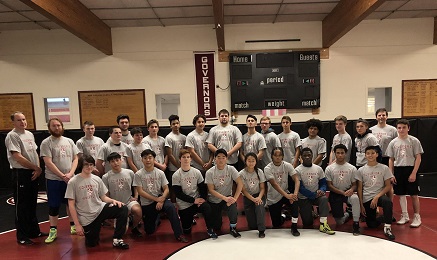 The Governor’s Wrestling team enters the season excited to continue the success of the previous campaign. Govs finished last season with a 16-2 record – sending four wrestlers to the league finals and qualifying eight wrestlers for the New Englands, placing tenth overall. The team finished in the top 50 at the National Prep Tournament. We are grateful to the young men and women who persevered through challenging seasons in recent years and helped rebuild one of the most storied wrestling programs in New England.

The mission of Governor’s wrestling is to produce champions on and off the mat. We recognize that wrestling teaches lessons that help the athlete long after their final match. Approximately 60% of last year’s team had not wrestled prior to coming to Govs.

We will be led this year by Captains Cam Macro, Alex Sherbak, Bejunior Fallon, and Trevor Nugent. Seven New England qualifiers return and will be joined by a group of talented newcomers eager to make a splash in Govs singlets. This is an exciting time to be on the mats in Byfield.

The coaching staff of Matt Hunt, Rod McLain, and Nathan Burke has combined for over 50 seasons on the mats as competitors and coaches. The coaching staff has a range of NCAA experience and maintain a passion for the sport. Former Governor’s wrestlers have gone on to wrestle at every level of the collegiate ranks. Our recently-renovated wrestling room features two full-sized mats and is a short walk from our state-of-the-art training room and weight area.

If you are interested in learning more about Governor’s Wrestling, please contact Head Coach Matt Hunt at 978.499.3316. You can keep up with us on Twitter @govswrestling.

Governor’s head wrestling coach Matt Hunt is entering his 17th year as a wrestling coach and his 9th as the head coach at The Governor’s Academy. He was proud to be named Prep Coach of the Year by the Massachusetts Chapter of the National Wrestling Hall of Fame for the 2018-2019 season. Coach Hunt started wrestling as a second grader in Denville, NJ, going on to compete for Lincoln-Sudbury Regional High School and the University of Virginia. While at Virginia, he was named to the ACC Athletic Honor Roll. He believes that wrestling teaches life-long lessons to competitors of all skill levels and has earned his Bronze Level Certification from USA Wrestling. Outside of Governor’s, Coach Hunt has helped train several mixed martial artists and remains an active Brazilian Jiu-Jitsu competitor. Coach Hunt teaches mathematics at Governor’s and lives on campus with his wife and two children.