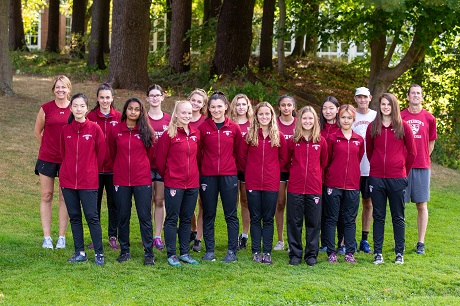 Cross-country at the junior varsity level is designed to include all participants to the fullest extent of their abilities. Athletes at this level train at a pace that challenges them but it is not as rigorous as varsity training. Practices are often preceded by a full team meeting, creating a supportive and fun team atmosphere in which everyone can participate. Coaches help every runner set personal and team goals for the season, providing as much guidance as possible. Being a member of this program requires the athlete's strong commitment to hard work; the rewards are a positive team experience, increased self-confidence, motivation, self-discipline, and the opportunity to run faster than she thought possible.

Every healthy member of the girls team runs in every regular season meet, held on most Saturdays in September, October, and November. A member of the JV team who runs a faster time than a varsity runner in a given week's race is usually promoted to the varsity team for the next week's race, and this may occur during the course of the season, and for championship meets.

Head Coach Jeff Kelly ’85 ran cross-country his senior year at Governor Dummer Academy and continued his pursuit of running through and beyond college though not competitively.  He became assistant cross-country coach under long-time and highly respected Governor’s coach David Abusamra in 2000.  Upon David’s retirement in 2011 Jeff took the reigns as head coach of both boys’ and girls’ teams.  He has run in and won several road races in the area, and has run for the Greater Boston Track Club masters’ team in cross-country.  He is a USATF level 1 certified coach.  He enjoys training, both on his own and with his runners, and sharing his love of all things running with his athletes.

Elizabeth Honorato ran cross-country her sophomore and junior years at Phillips Exeter Academy. She has always had a love for running and trains on her own for pleasure and fun. She has run several road races in California and in the New England area. She joined The Governor's Academy cross country team as an assistant coach in the Fall 2016.  She has enjoyed training with, learning from, and advising her runners. She looks forward to a wonderful season with an amazing and talented group of athletes.

Becky Stratton has taught and coached in Independent schools for over 15 years and was thrilled to join the Cross Country coaching staff at Govs.  A varsity athlete at the high school and college levels, Becky soon recognized that running was her favorite part of any sport.  In high school she joined the winter track team in her “off season” recognizing a great opportunity to develop as a runner.  While competing in middle distance and relays, she learned the important role of “mentality” in running and found that it transferred her academic work and performance in other sports.  This experience solidified her love of running which continues to this day.  Becky competes in road races (the Tufts 10K and various 5K runs), enjoys running on trails in the woods, and cross-trains with core / pilates workouts.   Becky is a USATF level 1 certified coach and teaches all levels of French at Govs.