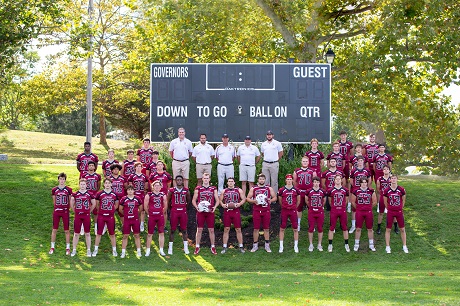 The Governor’s Academy football program is a vital component of our school community. The Govs have a deeply rooted tradition of achieving excellence on the football field while maintaining a healthy perspective on top-level competition. Located in the center of campus, the Sager Bowl provides an outstanding venue for watching the Govs compete during the fall season on the Parker Field, one of the best natural grass surfaces in the league. Each year about 65 student/athletes compete on the varsity and JV teams where every player receives quality instruction appropriate to his experience and ability.

Coach O’Leary took over in 2011 from long time Coach Mark Gerry who retired after 18 seasons. Coach O’Leary credits Gerry for the tradition and pride of the Govs football program. "I am truly grateful for the opportunity to coach at such a great school with rich tradition and I owe a lot of thanks to Coach Gerry for helping me reach this point.”

Our goals in the football program are simple: as individual players, as coaches, and as a united team we strive to get better at what we do every day; and we try to have some fun while we’re at it. We also value and respect the multi-sport student/athlete, strongly believing that commitment and dedication in one sport makes an athlete more competitive in other sports and more successful in whatever endeavor or challenge lies ahead.

We are proud of our football program, and we are eager to continue working hard to sustain our success. We invite you to learn more about playing football for Governor's and perhaps to join our ranks.

Jim O'Leary is a 1995 graduate of Northeastern University. He is entering his 7th year as head coach in Byfield. O'Leary started his coaching career back in 1989 as an assistant at Lynnfield High School under the mentoring of Bill Adams. O'Leary joined the staff at The Governor's Academy in 2010 as an assistant to long time head coach Mark Gerry and was promoted to head coach in 2011 after Gerry stepped down. The Govs have won four ISL championships and three New England Bowl Championships in his first six years as head coach including a 43-9 record.

Playing Career: O'Leary was a three year starter at quarterback while at Northeastern University. As a sophomore he broke the single season rushing record and was voted team MVP. O'Leary's career was cut short after suffering a career ending knee injury in the midst of his junior year.